TOM® PVC-O piping systems have between 15% and a 40% more hydraulic capacity than systems with pipes made from other materials and with the same external diameter.

This is because Molecular Orientation reduces the thickness of the pipe wall, giving TOM® pipes a greater internal diameter and flow section.

Besides, the internal surface is extremely smooth, reducing load loss and making it more difficult for deposits to form on the inner walls.

Load loss
Fluid speed
Pumping energy
Subsequently, TOM® pipes carry more water using less energy than other kinds of pipes. What’s more, they are the most efficient in terms of the relationship between investment and available hydraulic capacity.

TOM® pipes enable to withstand internal pressures up to twice the nominal pressure. 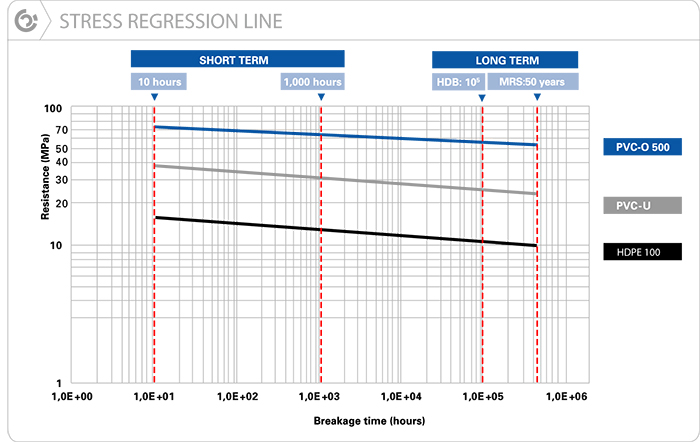 What’s more, although materials lose mechanical properties when they are subjected to pressure over a long period of time, this process is not as pronounced in PVC-O 500 as it is in conventional pipes. TOM® pipes have a service life of over fifty years.

The TOM® pipe has an expectative of service over 50 years.

Water hammers occur when liquid flowing through piping stops suddenly when a valve is opened or closed, if a pump is stopped or started or by airlocks shifting within the pipe. They depend basically on the fluid’s change of speed and the pipe’s celerity, i.e. the pipe’s dimensions and the material from which it is made.

So, the lower the celerity, the greater the pipe’s resistance to water hammers. 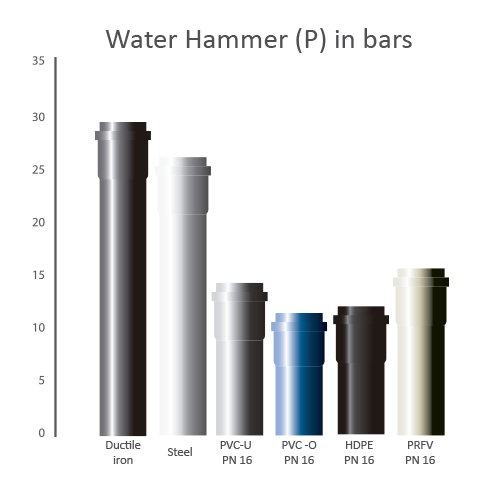 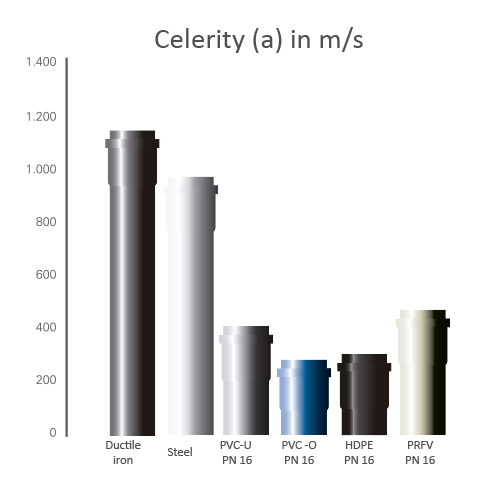 TOM® PVC-O pipes have a lower celerity than pipes made from other materials (up to four times less, in the case of metal pipes). That way there is virtually no possibility of breakage in the openings and seals of networks and when starting pumping operations. That means that every part of the network is protected.

TOM® PVC-O pipes are high impact resistant. This means there is no breakage during installation or onsite trials if pipes are dropped or if they are hit by stones.

Furthermore, molecular orientation prevents the propagation of cracks and scratches and reduces the risk of rapid crack behavior. The result is a spectacular increase in the product’s useful life.

Thanks to their excellent elasticity, TOM® pipes can withstand deformations of their internal diameter without the appearance of fissures.

If the pipes are flattened, or if they are involved in any kind of mechanical accident, they immediately go back to their original shape. Moreover, there is no risk of breakage from land subsidence or sharp impacts, such as from stones or machinery.

These pipes can withstand considerable weight. That makes for perfect performance once the pipes are installed underground.

To this end, the pipes have a seal composed of a polypropylene ring and a synthetic rubber lip that makes them be an integral part of the tube, preventing them to move from their emplacement or moving around generally while being installed.

The union mouthpieces are formed in the same orientation process what differentiates the manufacturing process of Molecor© from other manufacturers of Oriented PVC.

This gasket high quality and effective design of the cup, give full reliability to unions, ensuring the complete sealing of driving, and thus avoiding leakage of piped water.

PVC is a chemically inert material to all materials found in nature, so it is not necessary to take special care in the study of both the nature of the soil where the pipe is going to be bury, and the water quality that will run on his interior.

In addition, PVC-O is a homogeneous material, it does not require any special protection or coating, which in case of detachment or malfunction, reduce the life of the pipeline, everything resulting in cost savings.

It is immune to corrosion, making impossible the transfer of oxides and metals to water, what in case of potable water, can result in a public health problem if the quality parameters required for human water consumption are exceeded.

Its high chemical resistance to external agents enables the use of fertilizers and pesticides in the irrigation infrastructures being also resistant to the disinfectants commonly used in drinking water networks.